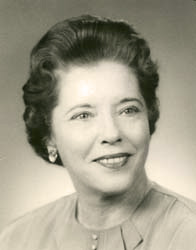 Graduated from the State Normal School in 1931 and received her BSHE from the University of Georgia in 1937.

Hired by the Extension Service in 1939 as a County Home Demonstration Agent in Newton County where she served for 9 years before becoming a District Agent in Athens.

In 1952, she was named the Assistant Associate Director in charge of home economics and in 1955 became the State Home Demonstration Leader later called State Home Economics Leader, a position she heald until her retirement in June of 1969.

Was known as a very strong leader who did a great deal of work with home demonstration clubs throughout the state, ensuring that these groups of neighbors met regularly to learn new techniques to help them in their daily work as homemakers, as well as learning a bit about the science behind these techniques. Home demonstration clubs frequently provided young women their first opportunities for public speaking and, in many cases, served as a springboard to more leadership opportunities.

Published An Evaluation of the Participation of Family Life Leaders in
the Georgia Agricultural Extension Service in 1957.