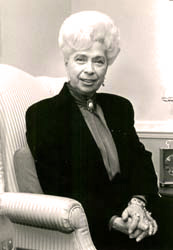 Provided twenty years of leadership, innovation and dedication to excellence while serving the University of Georgia as Dean of the College of Family and Consumer Sciences from 1971-1991.

Enrollment of the College increased 55% during her tenure.

Led the creation of the Home Economics Alumni Association in 1977.

Developed the Legislative/Congressional Aide Program which celebrated its 20 th anniversary in 2003. Outstanding students serve as aides in the Georgia General Assembly and in the U.S. Congress.

Initiated the Dean’s Aide Program, which provided students the opportunity to serve as representatives of the College in a variety of settings. Today these students are known as FACS College Ambassadors.

Worked to improve the physical facilities of the college including the addition of pillars to the front of Dawson Hall - “Pou’s Pillars.”

Tripled the number of scholarships for undergraduate and graduate students.