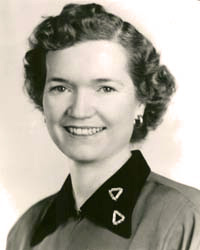 Valedictorian of her Chatsworth high school graduating class in 1927.

Received her BSHE from the University of Georgia in 1935.

Joined the Georgia Power Company and worked in Rome, Macon and Atlanta.

Major professional contributions were in improving the engineers’ understanding of consumer needs for home appliances and in teaching consumers how to get the best use of their appliances in an era when many new features were being introduced.

Played a major role in getting equipment for the foods laboratories at UGA.