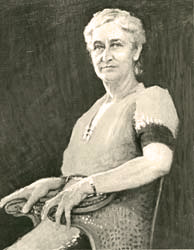 Mary Ethel Creswell graduated from the State Normal School in Athens in 1902.

In 1913, became the first woman employed by the Federal Extension Office in Washington. She first suggested the name “home demonstration” for the Cooperative Extension Service program that carried home and nutrition information to rural women and girls.

First woman to receive a baccalaureate degree from the University of Georgia – a B.S. degree in home economics in 1919.

First dean when the college was established in 1933. Served as dean until 1945. After she retired, she remained with the college as a professor until 1949.

Received the College of Family and Consumer Sciences Alumni Association’s Award for Outstanding Service in 1949.

A charter member of Phi Kappa Phi at the University of Georgia.

A University of Georgia dormitory bears her name.