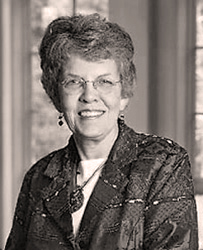 Through the years, Wanda Grogan has led continuing education programs in Athens, throughout Georgia, the region and the nation. Grogan also served as the college’s first director of alumni relations, helping initiate the alumni association in 1975 and becoming its leader after returning from Iowa State in 1978.

Grogan’s career was cut short in 1994 after she suffered a severe stroke following surgery for a brain aneurysm. Just one year after her stroke, with the support of her colleagues, she organized a statewide conference for 100 stroke victims and their caregivers.

Although she retired from her position with the university, Grogan is far from retired in her daily life. Instead, she joined the auxiliary program of St. Mary’s Hospital and works with two programs—one for those who have had strokes and another for people with arthritis. She has served on the auxiliary’s board of directors and as chair of its wellness group.